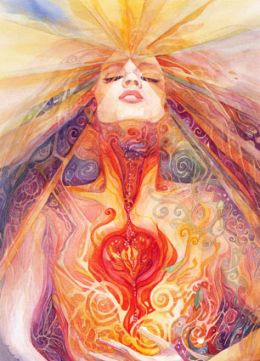 The heart chakra the color is green, and sometimes pink, the symbol is a circular flower with twelve green petals. Inside of the circle are two overlapping triangles which represent the union of male and female.

When the heart chakra is balanced we radiate divine love and feel deeply connected to others. The 4th Chakra represents unconditional love for ourselves and others.This chakra connects the bottom three chakras to the upper three taking us from our basic needs and animal nature to our divine and spiritual nature. Those with open heart chakras have a highly developed sense of touch. Their peaceful energy and compassionate touch are very healing to those around them.

Things That Throw The 4th Chakra Out Of Balance

Backbends Are Paticularly Good For The Heart Chakra.

Backbends will be paticullary difficult for those with blocked heart chakras as they feel unsafe. A blocked 4th Chakra manifest as an inability to open up and be vulnerbale in the area of the heart. Obviously, backbends require a total surrender in the area of the heart.
I would like to note that the third chakra supports the 4th chakra here providing the strength to let go in a safe way. People without the support of the third chakra will bend until they break. They often lack personal boundaries. The focus here is on opening the area around the heart. Mobilizing the upper back and opening the front of the chest are crucial.
Special attention should be brought to opening the hip flexors, psoas and thighs (2nd Chakra stuff) as well so as not to hinge in the lower spine in an attempt to backbend.

Here is a pretty cool (and long) quiz to determine what chakra is the most open. I think these are fun, and apparently you all do as well! Click HERE to take the quiz! 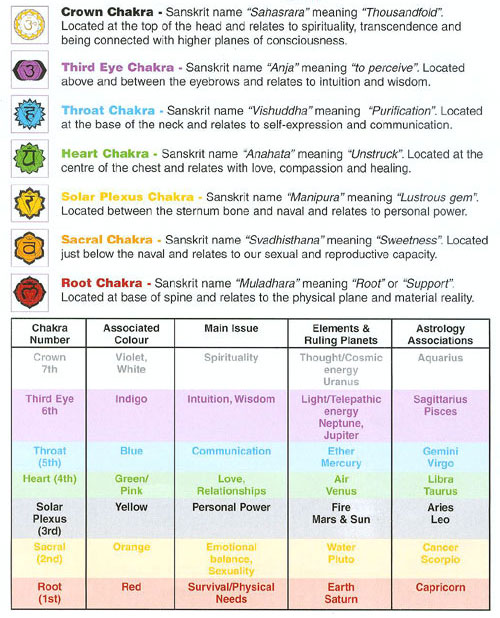 This article on the Chakras really helps to simplify a rather hard question. The Chakras may seem very esoteric and foreign at first, but this article really helps you to explore your own inner landscape with a few simple inquiries. Enjoy!

The word Chakra comes from an ancient Indian language known as Sanskrit, chakra means vortex, spinning wheel or circle. Chakras are the major centres of spiritual power in the human body and are circles of energy, which balance, store and distribute the energies of life all through our physical body along the subtle body. The subtle body is the non-physical body or also known as our soul or spirit, which overlays our physical body. The belief in … Read More

I missed going to my Kundalini class this week and find myself missing it already. Here is a cool post which gives you a pose for each energy center of the body! Enjoy!

“Men of great knowledge actually found out about the chakras – their workings, their petals, their sounds, their infinity, their co-relationship, their powers. They found that the life of a human is totally based on these chakras. They developed into a whole science. This total science gave birth to Kundalini Yoga. That is how Kundalini Yoga was born.” – Yogi Bhajan The human body is a complex system encompassing vast energy systems that are not … Read More

via Blogs on topics which I find interesting

Yoga and the Chakras–Svādhiṣṭhāna: The 2nd Chakra, Sex, Satisfaction, Desire and Brhamacharya

Warning: If you are prudish about people talking about sex then you may want to leave now.

So, all of you non-prudes, here we go…

The 2nd cahkra is the sex chakra.

(It also deals with desire, guilt, lust, addiction…and, hold on because we are just getting started…)

In my opinion all the ‘biggies’ on a very emotional/physical plane.

Svadhisthana means “dwelling place of the self.”

If you think about its location which is about 1 inch below the navel approximately it is quite literally where all creative life springs from so “Dwelling Place of the Self” makes perfect sense.

That is where you (Yes, you!) came from, I came from, and for that matter everyone else came from.

So yes, this is the beginning of all creativity so to speak, on a very basic level.

Now when I was first learning about the Yamas and Niyamas I immediately dismissed Brahmacharya thinking “Oh, here we go again…!” I felt annoyed, a little angry and let down that yoga being as ‘cool’ and seemingly ‘open-minded’ so far, was now trying to impose the same rules and regulations on sex that every other religion was trying to impose. (albeit with a much different approach)

However, what I see now is that Brahmacharya is really a way to balance our desires, and ultimately satisfy them, not deny their existence.

Now, the 2nd chakra deals with control, lust, desire and taste which brings me to a little story about when I was younger and my parents had left town.

(and no, it’s not that kind of story so relax!)

Excited to not have our mother “controlling”

(and I use the term control with humor of course, my mom is probably the least controlling person I know,…except of course when it comes to eating your vegetables at dinner time and then she can be a tyrant!)

what we ate for dinner me and my sister each ate what we desired and decided on an entire apple pie for dinner!

It tasted sweet at first,… and even though the first piece satisfied my lust for the juicy apple pie I continued to eat,

…until I got sick!

The moral of this story and how does this pertain to our relationships with the opposite sex?

What I am suggesting, is that at times we may be so thrilled to relinquish all control over ourselves in a quest to satisfy our hunger to be desired or feel an emotional, sexual, and/or spiritual bond with someone we sometimes fill ourselves up with meaningless, unsastisfying sexual relationships.

We end up feeling drained, sick, unsatisfied and let down. We settle for sexual and emotional “junk food” for which we ultimately pay a price.

And just like the little girl who ate an entire  apple pie,

It is not that sex is bad, or apple pie is bad, it is how we go about fulfilling our desires.

Can you be satisfied with just one delightful piece?

Or, do you really need to have the whole pie?

Will that satisfy you?

Or, will it actually leave you unsatisfied and drained like a bad sugar hangover?

Perhaps we need to learn to savour, taste, and enjoy…the right way. Take our time finding out who this person really is…

Could it be, we are over-sexed and under-satisfied as a whole?

When we lose sight of what is sacred, beautiful and redemptive about sex, and it becomes sexual gluttony at its best and depressing at its worst.

I am not speaking about the act itself, I am talking about the machine that is sexual obsession that leads to unhealthy dysfunction instead of meaningful, healthy, relaxed, satisfying interaction that is a sacred act between two human beings.

Meaning of Svādhiṣṭhāna: “Dwelling Place of the Self”

2nd Chakra Location: The lower abdomen, about an inch below the navel.

The organs/glands/parts of the body associated with this chakra are:

Ideally this chakra brings us fluidity and grace, depth of feeling, sexual fulfillment, creativity and is also associated with procreation. It  governs desire, and the sexual, creative, emotional and sensual aspects of our being. When in balance we have relaxed and positive views towards sex and involve ourselves in responsible relationships. We are creative and fulfilled in our creative endeavours.

Since the 2nd chakra influences the sexual organs and the functions associated with this center are emotion, vitality, fertility, reproduction, and sexual energy in general. Likewise, any problems in these functions can be identified and resolved through this chakra.

When out of balance…

The emotion associated with the 2nd chakra is passion. If you grew up in an environment where emotions were repressed or denied, this chakra may be deficient. Some signs of deficiency are fear of pleasure, being out of touch with one’s feelings and resistance to change.

Things that can cause an imbalance in the 2nd chakra:

Foods that Fuel Your Sacral Chakras

Orange is a high energy and very stimulating! Orange is a great colour for playfulness and creativity. The vibrational energy is sexual too, not surprising since orange is associated with the sacral chakra. Because of its highly charged intensity some people cannot comfortably wear this color. This colour also shows playfulness and creativity and an be worn as can accent if someone is timid about wearing it head to toe.

A fun yoga quiz that tests which chakras are in balance.

Chakras and how you know which ones are working/not working is beyond my scope of expertise however I did find this really entertaining, interesting and possibly pretty true chakra test online the other day and thought I would share it with you guys. Take this chakra and see for yourself.

Of course I do not know how correct this test is, however it is fun, and I thought mine was enlightening in and fairly true. See for yourself, but most importantly do it for fun and don’t take it too seriously if you find out that your chakras are imbalanced as I do not think that was the intention behind it. 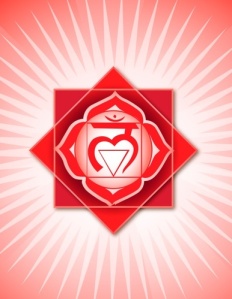 The Root Chakra when balanced will make you feel calm, centered, safe and “rooted” so to speak.

Circumstances that “pull up our roots”

Some people who have busy lives, are overworked or have paticularly active imaginations may feel ungrounded more often. They may feel like they are living in their head instead of their bodies. My advice? Do more Yoga!

Standing poses are paticularly good for the First Chakra.

The focus here is to ground the feet, sretch the hamstrings, and strengthen the thighs. These poses will aid in helping you feel peaceful, calm and secure.

The Root Chakra grounds us in physical existence. It element is earth and it relates to our bodies and the material world around us. Our right to BE.

The focus here is our concern with survival. A roof over head, food and money. The major development of this Chakra is our first year of life. If we were abandoned, undernourished, didn’t bond with our mother or had a traumatic birth the Chakra can develop a glitch that will need to be cleared. There can often be a karmic element to this.

Emotionally, we might suffer from an inability to stand up for self, fear, not feeling a sense of belonging, inability to provide for your necessities in life, selfish, feeling victimized and attachment to material things.

Sometimes eating disorders stem from this Chakra. One who suffers from obesity may feel very unsafe and feels the need to weigh themselves down in order to belong. Someone who may suffer from anorexia might struggle with feeling that they do not deserve to be, to take up space.

Clutter in the home is a covering up of your true self.

It is not possible to see your true potential if it is hidden away. Often it shows we have no faith in our future when we cannot let go of objects.

When Muladhara is functioning properly we have a strong sense of self, stability, grounding, prosperity and good health. We possess all the keys to manifest in life. 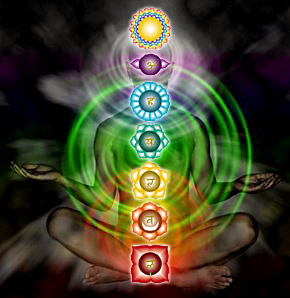